We took our kids’ to their first Pride parade yesterday. Our reason for waiting until this year (when our kids are 6 and 8) had nothing to do with being concerned with exposing them to the LGBTQ scene. We were simply concerned with logistics. Concerned that we would be wedged into a crowd in the hot sun with two young kids who would rapidly get tired and whiny, and we’d have to try to make our way out of a crowd with tired, whiny kids shortly after we arrived. I’m not sure if that would have been the case if we had taken them earlier, but it certainly wasn’t the case yesterday. My kids loved the Pride parade.

Really, what’s not for a kid to love about the Pride parade? There are big balloons and colorful costumes and fun music. There are people handing out beads and bracelets and candy and more beads. (By the end my children were more beads than people.) It’s a place where they were encouraged to yell and cheer instead of being told to be quiet.

But Pride is not just about the party. It is about marginalized people standing up against hate and discrimination. 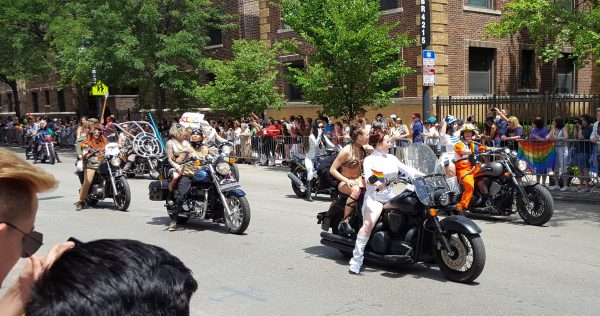 I tried to explain that to my kids before we went to the parade. I don’t think they got it. Why would they? According to a recent article, our neighborhood is one of the “gayest” in the country, and gay couples and families make up 53 percent of our households. My kids see LGBTQ people every day. They don’t even have to leave the block. They don’t see our neighbors, friends, and family being discriminated against. They just see them living normal, happy lives. The main question my daughter asks me about the gay couple next door is why they don’t have kids.

Unfortunately, not everywhere is as accepting as our block. A friend who was in the parade posted pictures of some of the hateful signs she saw along the way. State laws continue to be passed and supported discriminating against LGBTQ people. Gender and sexual orientation have been disappearing from some equal employment opportunity statements. LGBTQ people around the world are jailed or killed every day.

Right now my kids just see Pride as a fun afternoon. I hope someday that is all it has to be. Until then I will try to keep teaching them that rainbow flags are more than just pretty and “gay” isn’t a bad word. I will try to teach them that in a world where a lot of people still choose to hate, we choose to love.