Ann Imig starting “giving motherhood a microphone” with the first Listen to Your Mother Show in Madison, Wisconsin in 2010. Since then the show has been performed in 54 cities. Despite the name, the people who read personal stories at Listen to Your Mother shows are not necessarily mothers, but all the stories reflect on mothers and motherhood. There are so many variations on that theme! Some stories are funny. Some other sad. Some are a little bit of both. All the stories are unique yet they speak to overwhelming relatable feelings of love, fear, uncertainty, pride, relief, and so much more.

This is the final season of the national Listen to Your Mother show with performances in 29 cities. The final Chicago show is on Sunday, May 7 at 2 PM at the Athenaeum Theatre (Buy tickets here). If you haven’t seen one of these powerful shows take advantage of this final chance. 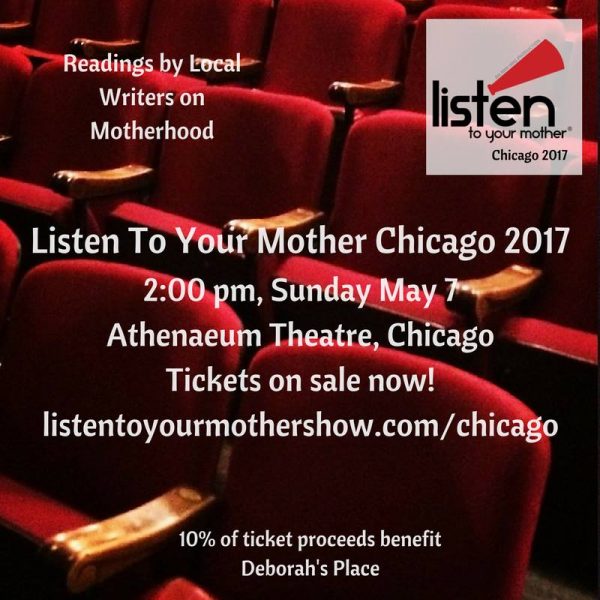 When I joined the Chicago Listen to Your Mother Cast in 2014 it was terrifying. Sure, I’ve been performing on stage since I was a kid. Sure, I’ve been writing just as long. But I had always been on stage as a different character, which is so much safer than being myself. Similarly, my writing didn’t tend to be autobiographical and it was rarely intimate. Getting on that stage meant sharing my fears and feelings of inadequacy with a bunch of (mostly) strangers.

And it was wonderful.

What I learned from doing Listen to Your Mother was that I am not alone. I learned this from women who approached me after the show to share their similar feelings and experiences, but I also learned it from all the other stories of motherhood so different from mine yet somehow so familiar.

It is sad to think that Listen to Your Mother as we know it is ending, but it is not going away. Those of us who had the pleasure of being in these shows and watching these shows will always have those memories. Many of us will carry friendships with people who we got to know (or got to know better) through this shared experience. None of that ends just because the show does.

(Wow. I was really blonde then.)

I am incredibly grateful to have been a part of Listen to Your Mother. I look forward to seeing it in person one more time on Sunday.