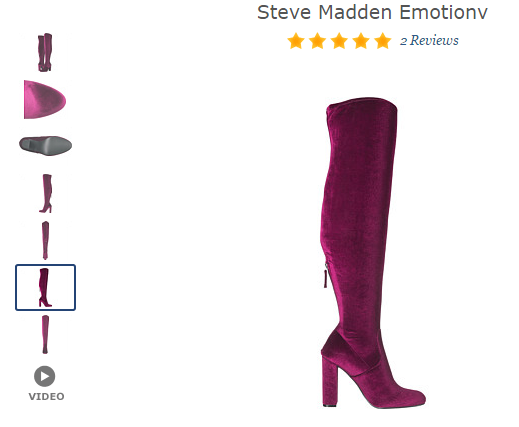 I was drawn to these boots, but of course I didn’t buy them. I no longer have a lifestyle that includes many occasions for which burgundy velvet over-the-knee boots are appropriate. Even if I had such an occasion would I even have the guts to wear them? I’m over 40! I’m married with two kids! Those boots would be a complete waste of money. No, I definitely didn’t need those boots.

But I kept thinking about those boots. I kept looking at them. Then I saw an ominous warning:

ONLY 3 LEFT IN THIS SIZE.

Oh, no! What if I when I finally decided to get these boots they were sold out in my size? Sure, a more prudent person would probably take that as a sign that she really didn’t need these boots. I took it as a dare. I decided I would buy the boots to give myself time to think about them but knowing I’d probably just end up returning them.

The giant Zappos box sat unopened for over a week. I didn’t even look at the things. To be honest I was kind of afraid of them.

Then, late one night I decided to try on my burgundy velvet over-the-knee boots. They weren’t scary. They were soft and rather fun.

I wore those boots on Sunday night. Out of the house. In public. I wore them to a friend’s theatre fundraiser. I offset the boldness of the boots with simple black skinny pants and a black sweater. I wore the boots, and I felt good about myself in the boots.

To be honest they were a bit much for the event. At the same event last year people were rather glammed up, but that time there had been a David Bowie theme since he had just died. This year people were much more casual. I still have no regrets about those boots.

So now I am a middle-aged mom who owns a pair of burgundy velvet over-the-knee boots. This probably just confirms my months long suspicion that I’m having a midlife crisis. I don’t care. Hey, sexy boots are cheaper than a sports car.

The questions that remains is when will I figure out another excuse to wear these boots? I guess if nothing comes up before then I could always go as a much older Taylor Swift for Halloween.

PREVIOUS POST: Meryl Streep and me and my exboyfriend